A prescient critique built on a shaky foundation 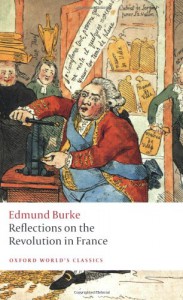 This is a work which I had long planned to read for two reasons. The first was its historic importance, as Burke's book has long been held up as an important early critique of the then-ongoing French Revolution. The other was its citation as an ur-text of modern Anglo-American conservatism, one of the sources that shaped the mold it would have for the next two centuries. Yet it wasn't until recently that a variety of factors combined to propel it to the top of my reading list.

What amazed me in reading it is how terrible it is. Burke's criticism of the French Revolution suffers from a glaring flaw from the outset, which is that he never acknowledges the reason why it took place. In his view, the changes France needed could have been addressed within the kingdom's existing institutions, with no need to demolish them as the revolutionaries were in the process of doing. What Burke fails to appreciate, however, is the degree to which the institutions themselves were part of the problem. After all, how could the French adopt a representative institution that existed exclusively in the mind of Edmund Burke?

Just as annoying is the English chauvinism of Burke's arguments. This is less problematic overall, though, especially when considering the context in which Burke was writing. As Leslie Mitchell pointed out in his excellent introduction to the edition that I read, one of Burke's driving concerns behind writing this book was that the revolution underway in France might spread across the Channel and break out in Britain as well. In this respect, emphasizing English superiority to his readers was not a bad strategy at all. Yet this belief in English superiority rested on an extremely slanted reading of English history, particularly the "Glorious Revolution" of 1688, which Burke holds up as a model. Setting aside the fact that the replacement of James II by William and Mary was in contrast to some of Burke's own arguments, the act itself was a military operation given a retroactive spin into a bloodless shrugging-off, one that Burke presents uncritically. Whether this reflects the contemporary interpretation of events passed a century ago or a deliberate misrepresentation is difficult to say, but either way the results are the same.

So if the book is as flawed as this, then how did it assume the outsized role it possesses today? The answer lies in his arguments, as beneath the flaws Burke can lay claim to a degree of prescience. Burke's concerns about the emergence of a strong man left me wondering what he would have thought about Napoleon Bonaparte. Would he have been a sign of the fever gripping France or a welcome return to the stability Burke sought throughout this book? Unfortunately, Burke's death in 1797, just as Napoleon was racking up victories in northern Italy, meant that he never had the opportunity to embrace or reject Bonapartism. Thus we will never know whether Burke regarded the Little Emperor's emergence as irrefutable evidence that he was correct or whether he would fall under Napoleon's spell as had so many others.