A disappointingly thin biography of “Old Rough and Ready” 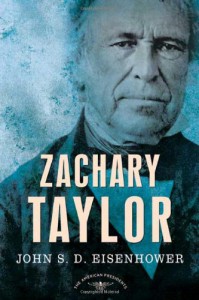 Zachary Taylor ranks among that small group of presidents who was more famous for what they did before they became president than for their achievements once they occupied the office.  A career army officer, he shot to fame when he led his troops to victory over Mexican forces in the Mexican War.  Basking in the adulation of a grateful nation, his parlayed his triumph into a victory as the Whig candidate in the 1848 presidential election, only to have his presidency cut short by his death less than a year and a half after taking office.

Given Taylor’s background and claim to fame, John S. D. Eisenhower would seem to be the ideal candidate to write a biography of America’s 12th president.  The son of a former president, he was a career army officer himself before retiring to become a prolific author of military histories.  Yet the end result is disappointing.  Eisenhower’s slim book is a sketchy account of Taylor’s life, one that provides only the barest of details about the man and little real understanding of his role in American history.  The first quarter-century of Taylor’s life are covered in a scant eight paragraphs, reflecting the lack of effort in understanding the role these early years played in shaping his personality.  Much of his early military career is also glossed over in a rush to get to the critical years of the Mexican War.  These chapters play to Eisenhower’s strengths, allowing him to draw upon his previous work on the conflict, .  Yet even here precious space is wasted providing unnecessary or superfluous background to events, diminishing the book’s value as a biography of Taylor even further.

Though Eisenhower’s final chapters dealing with Taylor’s time as president provide more in the way of detail and analysis, they cannot make up for the overall deficiencies of this book.  Overall Eisenhower’s biography is a disappointing entry in “The American Presidents” series, one that fails to reflect the considerable strengths the author brought to the project.  Readers seeking more than the barest details of Taylor’s life would be better off picking up K. Jack Bauer’s far more substantial Zachary Taylor : Soldier, Planter, Statesman of the Old Southwest instead of this book, with fails to satisfy any real appetite to learn about Taylor or his role in American history.