Rich premise and great characters, but a predictable plot 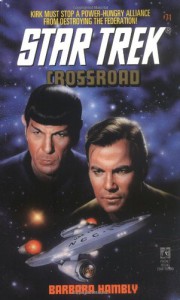 While engaged in the exploration of the treacherous Crossroad Nebula, the U.S.S. Enterprise detects a vessel that shouldn't exist: a Constitution-class starship with more advanced design elements, yet bearing signs of considerable age and wear. With the ship on a course for Tau Lyra III, a planet with a pre-warp civilization, Captain James Kirk beams aboard the half-dozen members of the ship's crew and detains them for their evident intent to violate the Prime Directive. But the crew soon escapes captivity and takes over the Enterprise, holding it hostage until their ship is repaired and their voyage to Tau Lyra is resumed. As the crew struggles to retake control, the mounting evidence makes it clear that the anomalous ship is indeed from the future and that its crew is waging a war against the greatest tyranny in their galaxy: the Federation.

Barbara Hambly's novel is one that I looked forward to reading for two reasons. The first was the back cover description, which promised a rare Star Trek time travel novel involving interaction with the future. It's always interesting to me to see where authors project the future of the Star Trek universe as heading, especially at a relatively early stage in the franchise before the shows locked in the canon. Here Hambly doesn't disappoint, fulfilling every expectation she set for me with her previous contribution to Pocket Books's Star Trek novels, Ishmael (which I still retain fond memories of despite having read it decades ago). Indeed, she provides a very rare bird indeed: a future Federation corrupted by a sinister organization that uses plagues, psionics, and advanced FTL travel to dominate the Alpha Quadrant.

The richness of Hambly's premise and the development of her characters (both from the series and her own creations) are undeniable strengths of her book. And yet I found elements of her plot cripplingly tiresome. Far too much of the story follows the predictable patterns of a series episode: alien crew escapes detention and takes over the ship, the crew faces a threat at odds with lofty Federation ideals, and a daring plan involving phaser fire is needed to save the day. To be fair, there are a couple of unexpected twists and turns, but by the end of the novel I couldn't help but feel a little disappointed by the overall result. While Hamby's book is definitely in the better half of the novels in the Pocket Books series, it nonetheless fall short of what it could have been given the material with which Hambly gave herself to work.