A useful introduction, but one lacking in broader analysis 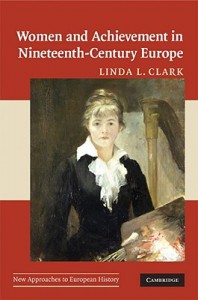 For women living in the West, the nineteenth century was one of considerable achievement. Though most lived lives defined by gender norms enshrined by class and tradition, a determined few sought to breach the barriers before them to gain greater opportunities across a variety of fields. This effort and its accomplishments is the subject of Linda Clark's book. In a series of chapters she surveys women's advancements across professions dominated by men, from the creative fields of art, literature and music to the increasingly professional realms of education, law and medicine. Though their numbers were limited, Clark credits them with making possible the careers of the hundreds, then thousands, of women who followed them in subsequent decades, making possible the opportunities heretofore denied them.

Clark's book is an informative account of the campaigns for women's rights at a pivotal point in European history. Her focus is almost exclusively on women at the upper ends of society, which is understandable as they were the ones with the means to wage such efforts. Yet their more clearly delineated lives can hamper her text, as at several points her text becomes little more than a series of biographies of remarkable individuals, with little in  the way of analysis that draws out broader conclusions. This focus on the specific rather than the general extends to her coverage of national restrictions; while an understandable approach, rarely does she break from this to offer any overarching assessment that justifies such a Europe-wide approach. This makes her book a useful introduction, but one that leaves readers to draw their own conclusions as to the broader factors behind the march of women towards greater rights and equality of opportunity in the West.