For the Common Defense: A Military History of the United States from 1607 to 2012
William B. Feis, Peter Maslowski, Allan R. Millett
Progress: 467/736 pages

Starts slow, but comes together well 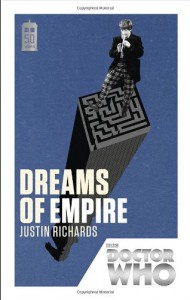 On a fortress built into an asteroid on the frontier of the Haddron Empire rests Hans Keysar. Formerly one of the three consuls of the republic, he is a prisoner after a failed attempt to become emperor that resulted in a debilitating civil war. Now on the eve of a visit by Milton Trayx — his friend, former co-consul and victor in the civil war — someone is engineering a plan of escape. But that plan doesn't factor in the unexpected arrival of the Doctor and his companions Jamie and Victoria, who arrive just as the first moves are made . . .

I must confess that early on in Justin Richards's novel I was tempted to give up on it, as it starts out slowly and introduces a number of ill-defined characters who were at times difficult to distinguish in the text. Once Richards sets the pieces of his story into place, however, the novel snaps together into a fairly entertaining book that leavens the "base under siege" storyline that was such a standard of the Second Doctor's era with a degree of political intrigue. The twists at the end — some predictable, others less so — keep things lively and entertaining as well. I'm glad I persevered with it, as it proved in the end to be worth the effort.