A superb introduction to a historic British city 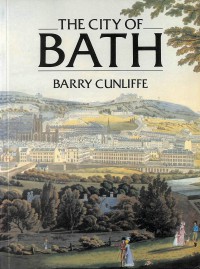 Given his stature in his profession and his prolific pen I was long aware of Barry Cunliffe's abilities as an archaeologist and a writer. What I didn’t discover until recently was that he had used his skills to write a history of the city of Bath. It’s a relatively short and well-illustrated chronicle of Bath’s evolution through time, one that reflects both his skills as a scholar and his love of his subject.

In the preface to the book Cunliffe explains that his primary theme is how the dual influences of landscape and the past shaped the city’s development. This results in a study mainly focused on its physical history, which plays to Cunliffe’s strengths. These are most clearly evident in the book’s early chapters, in which he provides an account of the area’s prehistoric and Roman settlement based on the available archaeological discoveries, much of which he had written about before. As he moves into the medieval era, though, Cunliffe draws more heavily upon the historical scholarship about the period, detailing the establishment of Bath Abbey, the emergence of the medieval town, and the shift from a primarily Church-controlled municipality to one run by the business leaders. As he shows, it was the latter’s focus on developing the town’s appeal as a spa that contributed to its revival in the 17th century, which paved the way for the architectural and civic planning marvels of the 18th century that make Bath the attraction it is today.

Cunliffe’s command of his sources and skills at concision result in a book that condenses nicely thousands of years of Bath’s history in less than 200 pages. It is a superb introduction to the region, hampered mainly by the growing need for an updated edition. Hopefully Cunliffe will write one soon, because it is difficult to imagine someone else with his formidable combination of abilities and passion undertaking a similar work anytime soon.