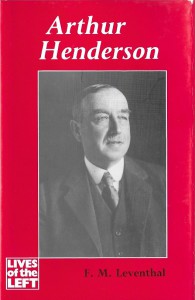 I have long wanted to read a biography of Arthur Henderson, yet the options are few: apart from Mary Agnes Hamilton's dated official "Life" of this longtime Labour politician and Nobel laureate there is just a puff-piece written at the peak of Henderson's career and Fred Leventhal's short contribution to Manchester University Press's "Lives of the Left" series. Though this is unfortunate, Leventhal makes it clear how much of the explanation for this is attributable to Henderson himself: while a renowned organizer and efficient party manager, he was not a great writer or speaker and left little in the way of revealing correspondence. Perhaps just as important a factor, though, was his personality, which Leventhal characterizes as "[a]uthoritarian, stubborn, [and] plodding," inspiring respect rather than affection from those closest to him.

One of the effects of this dearth of biographical studies is that it elevates the importance of Leventhal's book. In it he provides a concise, efficient overview of Henderson's career, tracing it from his early years as an ironworker and union leader to his role in building the Labour Party. Leventhal gives Henderson considerable credit for developing the party from a narrowly-focused union-dominated organization into one that had a national electoral presence. And while Leventhal does not discount Henderson's ambitions, he stresses his subject's commitment to his party over his personal career, a commitment that the author sees as the constant defining the key political decisions he made throughout his career. It's an argument that helps to explain why he was so admired by many of his peers, and underscores his pivotal role in the party's history as well as why Henderson deserves a more complete study of Henderson's life than Leventhal provides. Until he receives that readers will have to rely upon Leventhal's book, which provides the essentials about Henderson's political career efficiently and with insight.