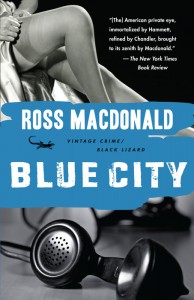 Though this isn't my first Ross Macdonald novel, it is my first one that isn't in one in his Lew Archer series. Instead his central character is John Weather, a World War II vet returning to his hometown after over a decade's absence to find that his father has been murdered and the town controlled by a gangster working with Alonzo Sanford, the local political boss.

While the novel is definitely a product of its era, there are some passages that are uncomfortably relevant today, such as this one containing a point Weather is making to Sanford:

"The trouble is that corruption isn't something you can have a little of. It's like cancer; inject it into a political organism and it's bound to spread. It's almost an axiom that power that has been taken out of the hands of the people is bound to grow progressively more corrupt."

Observations like that are just one reason why I keep turning to Macdonald's novels.