A useful narrative that misses the greater significance 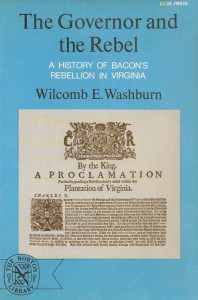 In the summer of 1677, a group of English colonists rose up against the colonial government of Virginia. Led by Nathaniel Bacon, a plantation owner who had moved to the colony just a few years previously, the rebels intimidated the government leadership into passing laws that restored suffrage rights to landless freemen and empowered Bacon with military command. When the longtime governor, William Berkeley, sought to reassert control, Bacon's forces marched on the colonial capital of Jamestown, burning it down after a short siege. With Bacon's death from dysentery, however, the rebellion soon collapsed, as Berkeley reasserted his authority and meted out punishment of the remaining rebel leaders.

Bacon's Rebellion is one of the most famous events in American colonial history, and was long held up as a precursor to the American Revolution a century later. Yet as Wilcomb Washburn explains at the start of his book, such an interpretation ignores the role that relations with the Native Americans played in sparking events. His book, which originated as Washburn's Harvard University doctoral dissertation, draws from the documentary record of the era to chart the development of the rebellion in an effort to explain its origins and how it came to be interpreted by contemporaries in the aftermath of its suppression. In a series of compact chapters, he recounts the events of the rebellion, starting with the growing tensions between the colonists and the Native Americans in the Potomac River valley, which was then undergoing settlement. Though the settlers wanted an aggressive response to the natives' attacks, Governor Berkeley sought a more defensive approach that would be less expensive than a military campaign. Into this vacuum stepped Bacon, who championed the setters' cause in the face of official indifference to their interests. Washburn sees Bacon as driven by ego and vanity, with Berkeley an underappreciated figure who managed events as well as he could given the circumstances against him. Recalled to England after the rebellion's end, Berkeley's death soon after his return denied him the opportunity to respond to the charges leveled against him, which left his reputation tarnished for generations afterward.

Washburn's book offers readers a extremely useful account of Bacon's Rebellion that details nicely the events immediately surrounding it. By examining both the role tensions with the local natives played in events and the goals pursued by Bacon and the other rebels, he succeeds in refuting the interpretation of the rebellion as an early democratic reform movement. Yet Washburn's focus is frustratingly narrow, as he both skirts the question of why relations with natives were at such a boiling point and fails to consider the long-term impact of the rebellion on the region. As historians such as Edmund S. Morgan would later explain, the growing unavailability of land for newly-freed indentured servants was a key factor in the deterioration of colonial policy towards the Native Americans, with one of the most important legacies of the rebellion being a greater reliance instead on slavery for plantation labor. That Washburn never addresses these issues limits the utility of his book, which provides a good description of the events of the rebellion while missing its greater significance for American history.