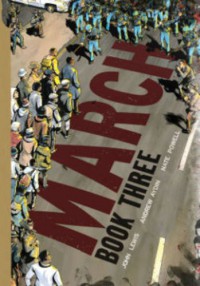 I had planned last night to start reading Hannah Arendt's The Origins of Totalitarianism for my buddy read with T-A and BT, but news of John Lewis's death pushed me instead to finish reading his great March trilogy. I was broadly familiar with its outlines, but reading and re-reading the volumes gave me an opportunity to reflect on what his life meant.

John Robert Lewis was born in Alabama in 1940. His parents owned a farm, yet still struggled to make ends meet. Young Lewis grew up in a South still fully governed by Jim Crow laws; the Supreme Court’s decision in Brown v. Board of Education did nothing to change the impoverished and segregated school he attended. Much, much more needed to be done.

And this is what Lewis did. While attending the American Baptist Theological Seminary he participated in the Nashville Student Movement, taking part in their sit-ins at local businesses to pressure them to desegregate their facilities. In 1961, Lewis was one of the original Freedom Riders, and he and the others were attacked repeatedly for engaging in perfectly lawful activity. He was also arrested numerous times, and was even imprisoned at Parchman Farm for a month. Yet his sacrifice and the sacrifice of his fellow protestors had an effect. People everywhere were paying attention.

In 1963, as chairman of the Student Nonviolent Coordinating Committee, Lewis was one of the “Big Six” who organized the famous March on Washington. He spoke that day, though he toned down his speech under pressure from the others. The following year, he organized as well the Mississippi Freedom Summer, and in 1965 participated in the march at Selma, where he and hundreds of other protestors were attacked by state troopers. He carried the scars he received on his head from their beatings for the rest of his life.

When I consider everything he went through, I cannot helped but be moved by the enormous moral strength and personal courage that he demonstrated. It was a fight that he never gave up on waging personally, even after he won a seat in Congress. Just this year he shared his lessons with the BLM protestors, who have experienced much the same treatment he did six decades ago. Instead of despairing about the slow pace of change, he expressed his optimism for how others were exercising their moral power, saying to one interviewer, “It was so moving and so gratifying to see people from all over America and all over the world saying through their action, ‘I can do something. I can say something’. And they said something by marching and by speaking up and speaking out.” His words reminded me of the lesson contained in Dr. King’s famous quote about the the long arc of the moral universe bending towards justice. Fighting for change is a lifelong struggle and we may not enjoy its fruits, but we will leave our world a better place than it was when we were born into it. That is certainly what John Lewis showed us.