From novelty to ubiquity 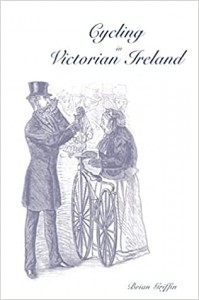 Given its ubiquity today, it can be difficult to appreciate how revolutionary the bicycle was when it was developed in the 19th century. In an era when most people were dependent upon walking to get to where they were going, the bicycle gave people greater individual mobility than had even been possible without a horse. Thanks to its low cost and the empowerment it offered, it took less than a generation for bicycles to go from a faddish novelty to a mode of transportation commonplace on the streets of cities throughout the Western world.

The introduction of the bicycle took place at a time when mass media covered new developments in almost obsessive detail. Brian Griffin drew upon this abundant record to delineate the early history of cycling in Ireland from the introduction of the first velocipede to the widespread adoption of the safety bicycle. It's an impressively detailed work that identifies by name the first bicyclists, traces the establishment of clubs and some of their key members, and describes society's evolving reaction to bicycles as their riders carved out a place for themselves on the roads and in daily life. This he sees not just in their employment by the hobbyist and the well-to-do, but their use by constables, civil servants, and priests in the performance of their daily duties. As Griffin makes clear, by the end of the century the bicycle enjoyed a prominent place in both practical activities and in the recreational life of the Irish.

Griffin's meticulous coverage of the bicycle's emergence in Ireland is a great strength of the book, as he captures within these details how people came to terms with the new technology of personal transport. He leavens this with humorous stories and a generous supply of details that capture the sometimes freakish novelty and occasional frustration with which people reacted to the bicycle. Yet Griffin rarely strays beyond the specifics to consider more generally the impact of cycling upon Ireland, such as in how it affected social mores or people's sense of time and space. It's an unfortunate gap in what is otherwise an interesting and even amusing study of the emergence of cycling in 19th century Ireland, one that should be read by anyone with a passing interest in either the subject or the era.